After the historic midterm elections, the 118th Congress is in office and has gotten off to a bumpy start, splitting Republican party members. The U.S. midterm elections have historically been marked by defeat for the party of the incumbent president. Political forecasters predicted a "red wave" would sweep the country in November 2022 - a moment of reckoning with the Biden administration. Instead, Democrats posted a big win, expanding their majority in the Senate and exceeding expectations in the House. A narrative of President Biden's low approval rating, domestic political concerns, and a worsening situation on the U.S.-Mexico border led to expect defeat in both chambers. Several factors, including the Dobbs effect, concerns about Democratic backsliding, and the president's domestic and foreign policy successes over the past two years, mobilized Democratic and independent voters to mitigate the projected defeat. The authors analyze the developments that led to the Democratic Party's successes in the 2022 midterm elections and outline the challenges that lie ahead. The analysis previews the Biden administration's chances of passing legislation with a lack of a majority in the House of Representatives. 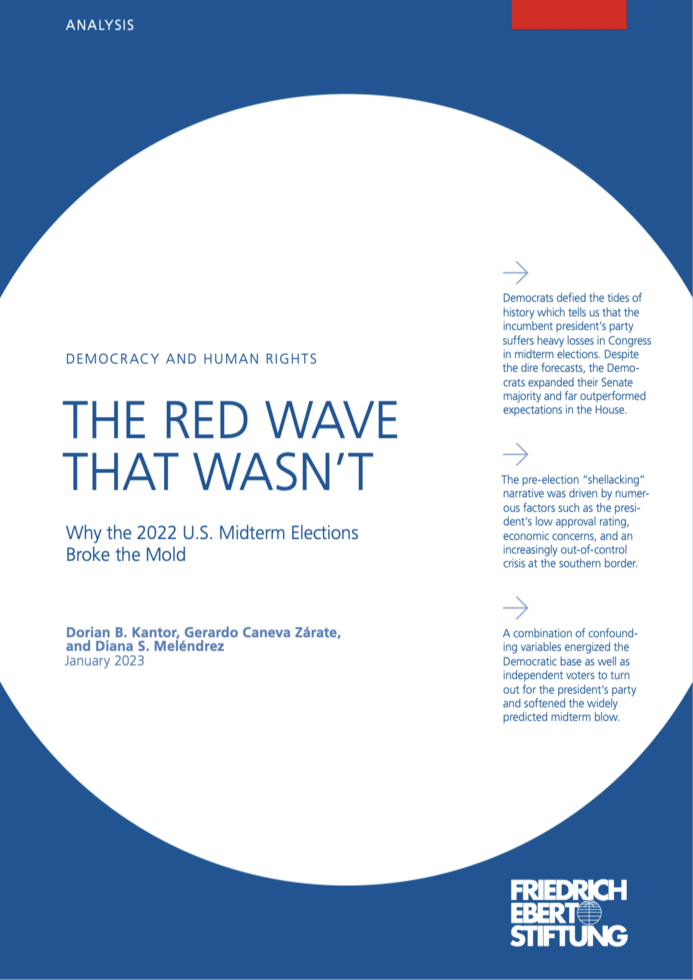 The 118th Congress is off to a rocky start as Representative Kevin McCarthy of California, the House Republicans’ presumptive leader, struggles to clinch the nomination for the speakership. Thanks to a rebellion spearheaded by a small coterie of ultraconservative lawmakers, the House remains at a stalemate, unable to conduct its inaugural business such as swearing in a new cohort of legislators, forming committees, or adopting rules. The reason for the current dysfunction is twofold. First, Kevin McCarthy is no longer seen as sufficiently aggressive to appease the far right of his conference. And second, the Republicans hold but a razor-thin majority of just 9 seats Hence, as long as Democratic lawmakers oppose McCarthy unanimously, there is little room for intra-party defection. Even former President Trump has weighed in on the revolt to made the case for unity on his Twitter-style site Truth Social urging Republicans riven by internal dissension not to “TURN A GREAT TRIUMPH INTO A GIANT & EMBARRASSING DEFEAT.”

McCarthy’s desperate scrounging for votes was not supposed to happen. In fact, in early 2020, when this research project began, it appeared to be a foregone conclusion that Republicans would deliver Democrats a rout that would rival Obama and Clinton’s first midterm losses of 63 seats in the House and 6 seats in the Senate and 54 seats in the House and 10 seats in the Senate, respectively. According to David Crockett, a political scientist at Trinity University in San Antonio, Texas, those years were only outliers in the sense that the party in power lost more seats than expected, with the historical average being about 30 seats (26 in the House and 4 in the Senate). In January of last year, NBC's and Politico's election analysts predicted a shellacking for Democrats, akin to the losses experienced by the party in 2010 and 1994, citing three primary factors: a widening enthusiasm gap favoring the Republicans, Biden’s low standing in the polls, and surveys showing overwhelming majorities saying that the country was headed on the wrong track. By contrast, the University of Virginia's Center for Politics predicted an outcome that would amount to a decisive defeat, but not quite the “shellacking” that NBC and other media outlets forecast. However, the “red wave” that commentators and electoral experts alike predicted never materialized. In this article, we will consider the factors from January to November of last year that affected expectations regarding the Democratic Party’s chances in a crucial midterm election and that ultimately led to the “red wave that wasn’t.”