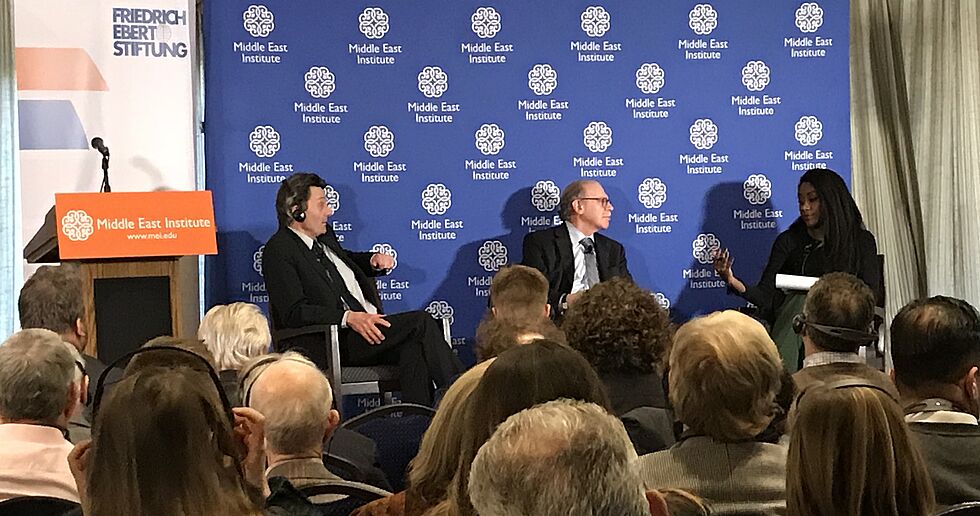 The Washington office of the Friedrich-Ebert-Stiftung was pleased to cooperate with the Middle East Institute in co-hosting a one-day conference entitled “The Divergence of Geopolitical Interest: Conflicts, Political Instability, and Diplomacy in the Middle East” in Washington, D.C. on February 26, 2019. Asking what’s at stake for the United States, Europe, Russia, and the critical actors in the Middle East, the conference brought together leading thinkers and actors on the region, including members of governments, think tanks, and NGOs for a high-level, closed-door workshop, followed by a panel discussion open to the public. Among those participating in the day’s proceedings were the Honorable Dr. Rolf Mützenich (SPD Member, German Bundestag), and Ambassador (ret.) Gerald Feierstein (Senior Vice President, MEI). The opening remarks of the afternoon session were delivered by Ambassador Joan Polaschik (Acting Principal Deputy Assistant Secretary, Bureau of Near Eastern Affairs at the U.S. Department of State), with Karen Attiah (Global Opinions Editor, The Washington Post) moderating the afternoon session.

The complexity of the conflicts in the Middle East

The complexity of the conflicts in the Middle East are individually confounding, and this complexity is only exacerbated when one considers the interrelatedness of these many conflicts. The geopolitical actors and interests involved mean that multiple regional conflicts have implications for global actors and relationships; be this the transatlantic alliance between the United States and Europe, the Europe-Russia relationship, or Russian-U.S. relations. External approaches to the Middle East were the focus of the morning workshop, entitled “Owning up to Reality: Rethinking the Approach in the Middle East”. Overviews of the German and U.S. Middle East policies were given before individual analyses of the situations in Iran, Syria, and Afghanistan were discussed.

Fundamental disagreement on the situation in Iran prevents effective U.S. and European cooperation, and the recent attempted resignation of Mohammad Javad Zarif could lead to a change in approach from Tehran towards Europe. In Syria, the U.S. emphasis on defeating ISIS and its narrow-focus on counter-terrorism complicates holistic programs and efforts from European actors to rebuild Syria – and the possibility of a U.S. military withdrawal risks the creation of a power vacuum. In Afghanistan, U.S. strategy is largely centered on negotiations with the Taliban while Germany and European allies focus on development and are concerned by the exclusion of the Afghan government from U.S.-led negotiations.

Analysis and discussion of Middle East peace processes, as well as discussion of the situations in Libya and Yemen were part of the dialogue. Concerning the Israeli-Palestinian conflict, worry persists that the peace process will result in a protracted conflict as the Trump administration keeps quiet on its position in deference to the Netanyahu government and the upcoming Israeli election. There is pessimism concerning the viability of a two-state solution; some doubt such a solution is possible given the continuation of Israeli settlement and occupation policies. Regarding Libya, it is not considered a priority by the Trump administration, upsetting Europeans as there is concern that instability in Libya could spill-over into the wider North Africa neighborhood and widen extant security gaps in the area. The war in Yemen is understood by European and U.S. experts to be a rooted in political enfranchisement issues, social, and economic interests rather than religious conflict, but the use of American arms against the Yemenis is a source of conflict between western allies. American arms sales to Saudi Arabia continue, and the support and maintenance of these arms as they are used by the Saudis against the Yemenis highlights the tensions among the Americans, the Europeans, and the Saudis: the western relationship is strained due to Saudi human rights abuses and the continued defense of the American-Saudi alliance at the cost of Yemeni civilians.

The public panel discussion “Shaping the Future: Geopolitics and the Middle East” attracted an overflow crowd to the Middle East Institute and was livestreamed and archived for viewing. In her remarks, Ambassador Polaschik argued that “despite occasional headline-grabbing policy differences, our approach to the Middle East and North Africa is rooted in a strong convergence of interests, not only with our allies in Europe, but also with our allies and partners in the region.” Polaschik continued, noting that the United States stands “ready to work with our partners who have the courage and leadership to address the challenges [of the region] … and who are ready and willing to make a positive contribution to regional peace, security, and stability. In doing so, we have no closer partners than our European allies.”

But differences of priorities and approaches to the Middle East nevertheless persist between the United States and Europe. MP Mützenich, in describing his perspective on the German and European approach emphasized human rights rather than stability. “For us in Europe,” he argued, “it is very important that human rights are a primary criterion. One of the really important challenges in the Middle East is responding to the legitimate demands of the majority of the population to participate in social and economic progress.”

Amb. Feierstein, responding to MP Mützenich, took the discussion to the subject of Saudi Arabia by arguing “…[that] human rights and civil liberties are essential for domestic stability and security. The question and the issue that we have right now, unfortunately, is that the Saudi government, the Saudi leadership, has moved in a direction where we have real questions about what their attitude is. And the Jamal Khashoggi issue […] does not exist in a vacuum. It exists with the context of ‘how does the Saudi leadership see itself in relation to its people?’ …If we ignore societal demands, population demands, and only look at the relationship with the leaders, then we end up in a cul-de-sac.”

On the subject of Iran and the divergence between the U.S. and European approaches to the country, particularly the Joint Comprehensive Plan of Action (JCPOA), MP Mützenich noted that, from the European perspective, “the JCPOA was a very great achievement, and I think there is a fundamental difference in the interpretation of how you use foreign policy tools – on the one side by European governments, and on the other side by the U.S. government, which is willing or seems more willing to tear up treaties of the past.” This was likened to the recent collapse of the INF treaty between the United States and Russia. “I have nothing against questioning previous treaties or agreements,” MP Mützenich said, “but I think you should always have to have an alternative on offer.”

Karen Attiah noted that the divergence in approaches across the transatlantic relationship might be related in part to geography: “…as they say, geography is destiny – so these conflicts, these issues are literally on Europe’s doorstep.” Returning to the issues of human rights, geopolitical stability, and the murder of her colleague Jamal Khashoggi, Attiah continued, asking “what are the results, what are we seeing in the wake of Jamal Khashoggi’s murder? Talking to Arab friends of mine, they basically say ‘these arguments about stability, about security, about exchanging our rights because we need to have stability today.’”

Ultimately no consensus has been reached on how best to balance security with human rights – a hallmark of the contemporary divergence of geopolitical interest in the Middle East.