Join us on November 9th! Information and Registration here 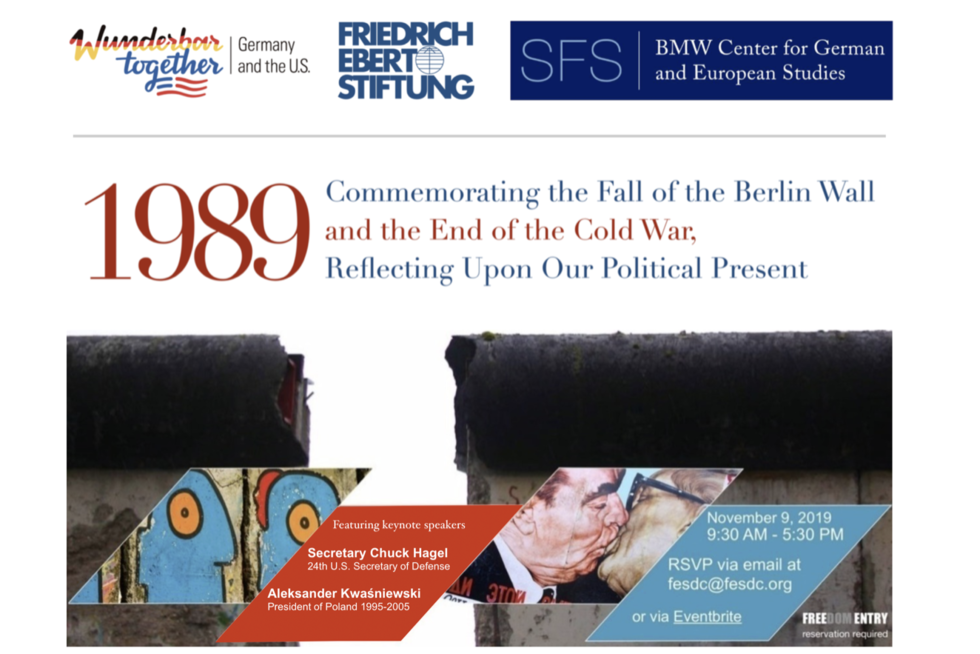 What can we learn from the fall of the Berlin Wall and the Peaceful Revolutions of 1989, and how can we apply these lessons to contemporary politics in Germany, Europe, and the U.S.?

The Friedrich Ebert Foundation and the BMW Center for German and European Studies at Georgetown University are pleased to host a conference on November 9, 2019 entitled

1989 : Commemorating the fall of the Berlin Wall and the end of the Cold War, Reflecting upon our Political Present

The end of the Cold War, the resulting geopolitical tensions, and the narrative of "The End of History" have had direct consequences and present political challenges to the United States and Europe. What lessons can we learn from 1989, and how can we use these lessons to combat right-wing populism in Germany, Europe, and the United States? Among contemporary political actors, social movements and political organizations, can any of them have comparable power to the Peaceful Revolution of 1989? These questions are not only timely at the 30th anniversary of the Fall of the Berlin Wall, but also of vital importance in our current crises of international order.

In our contemporary political moment, the memory of promise from the end of the Cold War seems to be fading amid the crises of contemporary politics. What errors have contributed to the loss of the great international vision of 1989? Additionally, what can we learn from 1989 that we can apply to our current situation, where Big Power politics and confrontations once again govern the world stage?

Aleksander Kwaśniewski, former president of the Republic of Poland (1995-2005) (confirmed)

11:30am -1:00pm - Panel I: The Delusion of the ‘End of History’: Liberal Political Visions and new Nationalisms

There was no “end of history” – the triumph of liberal democracy is no longer a foregone conclusion but something apparently in danger on both sides of the Atlantic. How do the consequences of recent history – of landmarks, events, caesuras, and crises – manifest themselves in political developments?

Which political visions should we as democrats be championing in the face of growing fascination with populism, nationalism, and fascism? What can we do to combat authoritarian movements and parties in our own countries?

Ambassador Ivan Korčok, Ambassador of the Slovak Republic to the United States. (confirmed)

Alina Polyakova, David M. Rubenstein Fellow in the Center on the United States and Europe and Security and Strategy team at the Brookings Institution; adjunct professor of European studies at the School of Advanced International Studies (SAIS) at Johns Hopkins University. (confirmed)

Angela Stent, Director of the Center for Eurasian, Russian and East European Studies and Professor of Government and Foreign Service at Georgetown University; Senior Fellow (non-resident) at the Brookings Institution. (confirmed)

What are the perspectives and visions of the free and just world order which we are working towards?

Charles Kupchan, senior fellow at the Council on Foreign Relations and Professor of international affairs in the Edmund A. Walsh School of Foreign Service and the Department of Government, Georgetown University. (confirmed)

Natalie Samarasinghe, Office of the Special Adviser on the Preparations for the Commemoration of the Seventy-Fifth Anniversary of the United Nations (confirmed)