During his visit to Washington, DC Lars Klingbeil, German MP and co-chairman of the SPD joined a discussion on Germany's foreign and security policy. The panel discussion was organized by the Atlantic Council and the Friedrich Ebert Foundation. 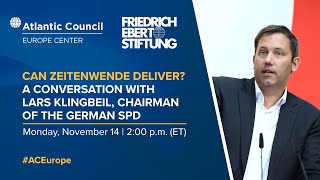 During his visit to Washington DC, German MP and chairman of the SPD Lars Klingbeil joined a public panel discussion with the title “Can Zeitenwende deliver?”, organized by the Atlantic Council and the Friedrich Ebert Foundation. Together with the experts Dr. Liana Fix, Europe-Fellow at the Council on Foreign Relations, and Daniel S. Hamilton, Senior Fellow at the Johns Hopkins University School of Advanced International Studies (SAIS), Lars Klingbeil discussed the future of Germany’s foreign and security policy. The discussion was moderated by Rachel Rizzo, a non-residential Fellow at the Europe Center of the Atlantic Council.

The discussion started with opening remarks by Lars Klingbeil in which he outlined which topics were important to him to discuss during his trip to the United States. Corresponding to the title, the big topic of the discussion was Germany’s shift in foreign and security policy due to the war in Ukraine: Zeitenwende.

During his remarks and also later in the discussion, Chairman Klingbeil described Germany’s pivot in security and foreign policy as a “historic shift” given among others the $100 billion fund for the German military forces, the plan to spend two percent of the GDP for defense from now on, the financial support and weapons sent to Ukraine despite being a war zone. Not everyone agreed with this argument. Daniel Hamilton described the Zeitenwende as a process. In his opinion, Germany still has a lot to do to fulfill the shift. The $100 Billion fund could only be the “tip of the iceberg”, argued Hamilton.

Germany in a leading role

In the past months, Lars Klingbeil stated several times that Germany should take a leading role in a new European security order, a demand which was much discussed during the debate. In response to the question of whether Germany was ready to take on such a role, Lars Klingbeil argued that Germany may have to take this leading role depending on the outcome of the next presidential elections in the United States and emphasized that it is ready to take more responsibility. The $100 Billion fund would prove that. Both experts on the panel discussion were not as convinced as Chairman Klingbeil. Daniel Hamilton argues, that the important question is not how much Germany spends, but how it spends the money. Germany and the EU would need a long-term strategy for a more independent defense policy. As the US is focusing more and more on the Indo-pacific region, Daniel Hamilton adds, they would welcome a more independent European defense policy. Liana Fix added a more European perspective and explained that currently, Germany is not trusted enough in the Baltic and eastern European countries for them to accept the Germans taking on more of a leadership role. Especially the relationship with Poland and France would be important for Germany to take on a leading role in a new, more independent European security order.

The third big topic of the discussion was Germany’s China policy and what it should look like in the future. Lars Klingbeil stated during his remarks, that Germany shouldn’t repeat the mistakes it made in its Russia policy with China – especially regarding economic dependency. He explained, that it is crucial for Germany to keep China out of economical areas connected to national security, but to not decouple completely from China. To do so, Lars Klingbeil argues, a good transatlantic relationship is important – especially in trade policy. He expressed concerns that the US industry policy, especially the Inflation Reduction Act, could lead to companies leaving the EU to go to the US, which would be a “critical situation” for German-American relations. Lars Klingbeil argues, that Germany is not able to have trade fights with China and the US at the same time. For that reason, Lars Klingbeil stresses the importance a transatlantic approach to a China policy.

The panel discussion with Lars Klingbeil was a great opportunity for the transatlantic dialogue and to gain different perspectives on Germany’s Zeitenwende. It has shown that Germany’s pivot in foreign and security policy is overall well seen in the US, even if there is still a way to go. The debate with the experts gave the viewers on Zoom, Youtube, and Twitter a lot of input and ideas on the future of Germany’s foreign and security policy as a European state and as an ally of the US.