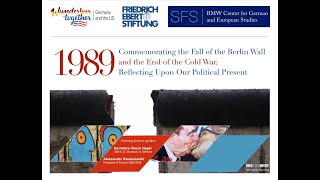 We take care about your privacy. Only when you click here, data from third party servers will be loaded.

To commemorate and celebrate the 30th anniversary of the fall of the Berlin Wall and the peaceful revolution in Central and Eastern Europe, the Friedrich-Ebert-Stiftung Washington Office organized the conference 1989: Commemorating the Fall of the Berlin Wall and the end of the Cold War, Reflecting Upon our Political Present in cooperation with the BMW Center for German and European Studies at Georgetown University, and supported by the Deputy Chief of Mission of the German Embassy in Washington as part of the Wunderbar Together project.

The conference sought not only to commemorate and celebrate the anniversary of the political milestones in Europe at the end of the Cold War, but also to consider the relationship of contemporary political challenges to the historic events of 1989. By bringing together participants and witnesses to 1989, political figures, experts, and journalists who could speak about their experience and perspective concerning the historical significance of fall of the wall, the many challenges of current politics, and the geopolitics and policy of the intervening years, the conference facilitated a series of day-long discussions that sought to provide some answers to the question of the relationship of history to politics. The conference proceedings were livestreamed and archived; you can watch the panel discussions in full-length here.

The former President of Poland, Aleksander Kwaśniewski, and the former United States Secretary of Defense, Secretary Chuck Hagel gave keynote addresses to start the day. Other featured political speakers included Ambassador Ivan Korčok, the current Ambassador of the Slovak Republic to the United States; Susann Rüthrich, Member of the German Parliament for Meissen, Saxony; and Liz Watson, Executive Director of the Congressional Progressive Caucus Center; as well as academic and think-tank experts.

“...we didn’t expect these changes to be so deep, and so immediate.”

In their keynote addresses, Aleksander Kwaśniewski and Chuck Hagel praised the actors of the moment 30 years ago and called for a robust defense of liberal-democratic institutions in the face of rising populism.

“I think the year 1989 was one of the most important in the history of mankind, and certainly for our region”, Kwaśniewski said. Describing his role in the peaceful revolution, Kwaśniewski cited his experience as “one of the co-leaders of the Roundtable talks in Poland… a dialogue between the Communist government and the resistance represented by the Solidarity movement. The negotiations proved that it is possible to change political systems through compromise and without blood.” This systemic change proved to be profound and swift: “we didn’t expect these changes to be so deep, and so immediate.” But the 21st century poses chances and challenges different than those faced 30 years ago. “Our traditional democracy is in crisis. We need new ideas, new methods, and good leaders” Kwaśniewski argued.

"We have to cooperate even if we are sovereign nations, because we are global citizens.”

Secretary Hagel reflected upon the United States foreign policy leadership in Europe 30 years ago, as well as the post-World War II global order that was forged on coalitions of common interest. But Hagel also emphasized the danger of our present political moment. “We suffer from a lack of trust and confidence in institutions” Hagel said, “and that is about as fundamentally dangerous as any one thing. If we lose trust in our institutions, we lose civility, which is the glue that keeps our societies together.” This danger is not just a concern in domestic politics, but at a geopolitical level as well: “…if you start taking apart the global alliances that we built after World War Two, the world will be in a lot of trouble. You don’t want a world where it’s every nation for itself. I don’t need to remind those of you from Europe about what happened on your continent in the first half of the twentieth century. I think global alliances have prevented a World War Three, and a nuclear weapon exchange”, Hagel asserted.  “If we didn’t have alliance relationships with all of our intelligence agencies… we wouldn’t have any idea how to handle international terrorism, security, burden sharing. We have to cooperate even if we are sovereign nations, because we are global citizens.”

NATO and western alliances were central to the conversation about the relationship between the political developments of 1989 and today. Hagel emphasized the NATO alliance in the interconnected, global economy. “I haven’t called and asked Macron what he meant with those comments [that NATO is a braindead alliance] – but I think what he’s implying is that we are draining the brainpower out of NATO by putting all other nations in the alliance in a position where they can’t trust us.” Kwaśniewski also firmly defended NATO: “It’s a sensitive issue because NATO is the strongest alliance in the world and [it has] protected the peace and prosperity of the transatlantic world for a long time. It is an extremely important factor in the security and stability of the entire transatlantic region. It was the main power against communism and the Soviet plan against the west.”

"This played into the myth of the triumph of neoliberalism...”

The first panel of the day was comprised of political scientists and historians who assessed the narratives of the Fall of the Wall in terms of German-German relations and the Cold War, especially through the fallacy of the ‘end of history’. “The end of the cold war brought with it an assumption… that Marxism was no longer a concern because it had been defeated. …Now that we didn’t have to worry about winning over the underclasses… the myth [emerged] that the end of the cold war meant the triumph of the market, when in fact, economically, it meant the triumph of the mixed economy. This played into the myth of the triumph of neoliberalism”, noted Georgetown University History Professor Aviel Roshwald.  Professor Helga Welsh of Wake Forest University added that 1989 signaled not only the rise of neoliberalism, but also a challenge for leftist political parties: "it was the beginning of a time where there was no alternative to capitalism, leaving very important implications for leftist parties. ...It lead to an identity crisis of the left." The identity crisis was more fundamental than that affecting party politics: "unification proved that a common language, shared borders, a common currency, even a shared history - do not make for a unified citizenry, because East Germans and West Germans had learned to interpret that history differently" argued Professor Joyce Mushaben. George Washington University Professor Hope M. Harrison noted that the end of history was a concept that appears more as a fairy tale than an explanation of historical political developments: “there were real people living in Germany, real people living in the east. History didn’t suddenly end. They didn’t suddenly become the wealthy West Germans that they thought they would overnight.” Indeed, Professor Harrison noted, history continued after the Fall of the wall, and for some East Germans, “some of these people have considered themselves victims since the fall of the wall, as opposed to victims of the Berlin Wall. …The fall of the wall was part of a bigger story.”

"...without an independent judiciary, without free media, there cannot be prosperity."

The second panel addressed the challenges of combating illiberal nationalism, with geographic emphasis on Russia and Eastern Europe. Ambassador Ivan Korčok, Slovakian Ambassador to the United States argued that “one has to see that from that moment [1989] on, when we regained freedom, we became part of the West. What’s currently happening in Central Europe cannot be isolated from what’s happening in the West at large. Democrats have much more to offer to people than populists do, because one has to measure not words but deeds.” When challenged by moderator Kim Dozier about the idealistic language of liberal visions combating nationalism, Ambassador Korčok articulated just one example for the concrete necessity of liberal rules-based institutions: “if people don’t understand that without an independent judiciary, without free media, there cannot be prosperity. …I’ll go to central Slovakia and tell people that investors from Germany will only invest in their city or village if we as a country provide for an independent judiciary.” Professor Angela Stent noted that some of the challenges in central and eastern Europe are narrative problems “both domestically, of confronting the past; and aided and abetted by outside forces [in Russia].” Dr. Alina Polyakova noted that the trajectories of history and of democracy are not linear: “what we see are ebbs and flows in the path of democracy… our lack of vision of a post-Cold War order has in many ways allowed for Russia or China to be able to exploit vulnerabilities in fledgling democracies and consolidated democracies like the United States and those in Western Europe.” Jill Dougherty maintained that the history of 1989 isn’t over: “I think that the collapse – of the Wall, of the Soviet Union – lives on in people’s minds. I think that the emotional part of this is very important… [because] in the minds and hearts of people, there was really no winning or losing, and it wasn’t really ideological” – it was about daily life.

"…What is missing here is a positive view of the future. What are the prospects?”

These issues of daily life and politics were pursued in the final panel of the day, which considered politics of disaffection in the United States and in Germany, in the rustbelt and the old German Democratic Republic. It dealt with both the disturbing developments of visible and emboldened xenophobia, racism, anti-Semitism, and exacerbated inequality, as well as the positive signs of political and progressive resistance. Member of the German Bundestag Susann Rüthrich explained the rise of the rightwing populist Alternative for Germany in Saxony as a cultural phenomenon: “We are not talking about the social problems that people have. …What is missing here is a positive view of the future. What are the prospects?” Whether in the former East Germany or in the rustbelt of the American Midwest, the problem is systemic, geographically broad and increasingly urgent. Charles Kupchan of the Council of Foreign Relations echoed the sentiment: "why have we gone from the uplifting moment of 1989, to the Trumps, Erdogans, Kaczyńskis, Salvinis, Orbans of 2019? I think it's combination of the digital revolution which is causing economic dislocation of a sort that is profound and enduring, and immigration, which is causing people to feel threatened. It's uniting identity politics and economic insecurity in a very volatile, poisonous way." Liz Watson, of the Congressional Progressive Caucus Center argued that the solution to dark political times is the organization and action of progressive forces: "[I have] come back to Washington to be part of the fight, to ensure that we have a progressive movement and a civil society that is actually strong enough to withstand… the most intense stress test you could possibly imagine on American democracy, which is the Trump administration."

With a day of discussion and reflection that did not shy away from the complexities of history and politics, nor the disappointments that cloud early success, the conference nevertheless concluded with an optimistic note: no history is a foregone conclusion, and the action of committed citizens and democrats holds the promise and spirit of peaceful, progressive change.

In co-operation with the Washington, DC office of the Friedrich Ebert Stiftung, Social Europe explored the 2020 United States elections, the potential…

Germany and the United States differ in their approaches to Russia’s energy trade with Europe, giving rise to a potential stumbling block over Nord…