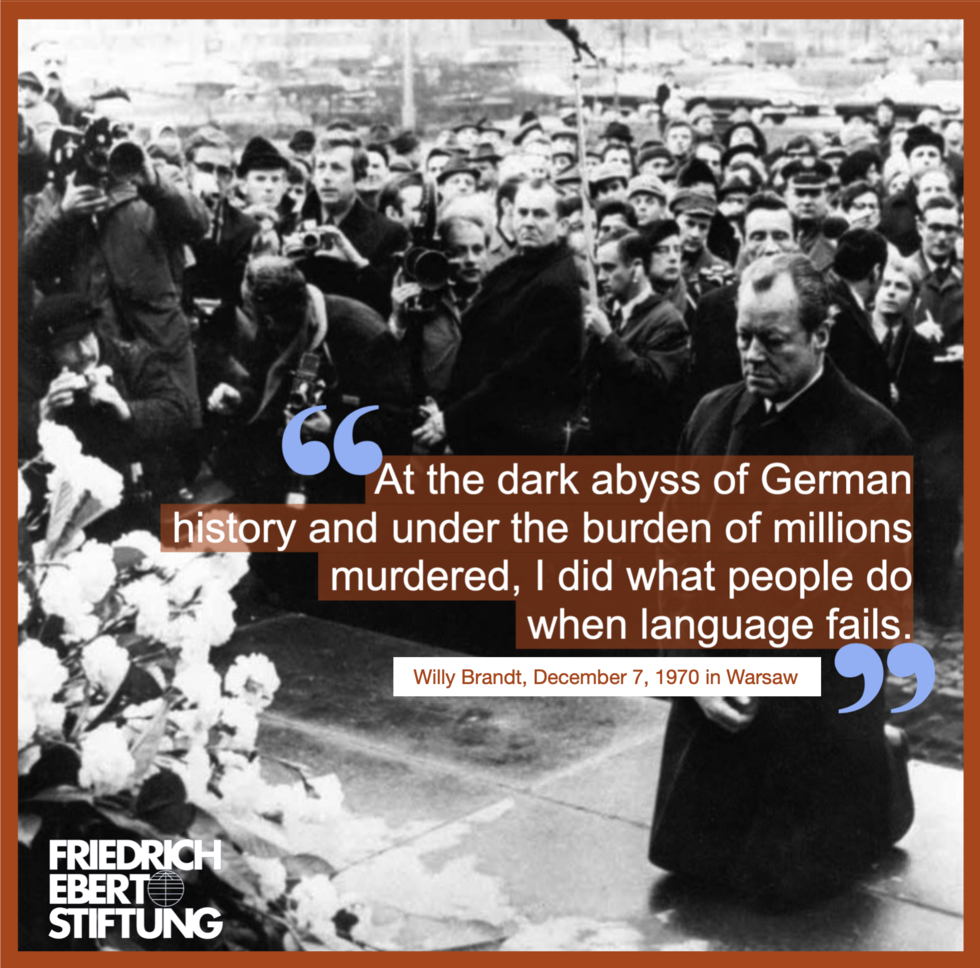 On the morning of December 7, 1970, an image went around the world: with heavy steps and a hardened expression on his face, West German Chancellor Willy Brandt slowly approached the Monument to the Ghetto Heroes in Warsaw. A large wreath of white carnations was laid, Brandt arranged the black-red-gold ribbons just so. Then – suddenly, unexpectedly – he sank to his knees. The Warsaw genuflection – this spontaneous display of emotion in front of the Monument to the Ghetto Heroes – is more than a gesture. It is an icon of reconciliation. Willy Brandt honored not only the uprising of the Warsaw ghetto, he offered an impressive sign of reconciliation between Poland and the Germans – a sign of departure and new beginnings, a symbol of the new eastern policy (neue Ostpolitik). With the signing of the Treaty of Warsaw on the afternoon of December 7, 1970, Brandt was underpinning the new political principles of the Federal Republic of Germany: change through rapprochement (“Wandel durch Annäherung”). 25 years after the end of the Second World War, West Germany recognized the Oder-Neiße line as the western border of Poland, forever conceding German territorial claims in Poland. This treaty cleared the way for Polish-German partnership and helped to overcome the division of Europe. The visit of the West German chancellor to the Polish capitol was a milestone on the road to European reconciliation, the rapprochement of east and west, and European integration.

In a 2010 interview with the Museum of the Warsaw Uprising, Brandt’s confidante and the “Architect of the new east policy”, Egon Bahr, emphasized the importance of the Treaty of Warsaw. It was the prerequisite for Poland’s return to Europe and opened the future possibility of overcoming the east-west conflict. Bahr described the enormous pressure and strain Brandt was under during this trip to Poland. “I suddenly had the feeling that just laying a wreath was insufficient” Bahr recalled Brandt saying after he dropped to his knees. Brandt himself wrote in his memoirs that “at the dark abyss of German history and under the burden of millions murdered, I did what people do when language fails.”

Hermann Schrieber of Der Spiegel correctly described the genuflection: “…he knelt there, though he didn’t need to, for all those who found it necessary bult couldn’t kneel there – because they didn’t dare to, or couldn’t, or couldn’t dare to. He confessed a guilt that he personally did not bear and asked for forgiveness that he personally did not need. He knelt there for Germany.” For the reconciliation with neighbors in the east, Willy Brandt was awarded the Nobel Peace Prize in December 1971. His political message was simple, the goal was clear: through the confession of German guilt, Willy Brandt made an important step in overcoming the division of Europe. The Nobel Committee cited “Willy Brandt, in the name of the German people, stretched out his hand to reconciliation between countries that have long been enemies, contributing to strengthening possibilities for peaceful development not only in Europe, but in the whole world.”

In a widely attended 2010 speech at the Royal Castle in Warsaw on the occasion of the conference “Europe: Continent of Reconciliation?” the American historian Fritz Stern cited the symbolic power of Brandt’s visit to Warsaw. The theme of reconciliation has only increased in relevance in light of global conflicts. European politics has an obligation to assume responsibility for other processes of reconciliation. Almost prophetically, Stern mourned the then burgeoning strands of nationalism and egoism – former passion for Europe was giving way to these rivaling postures, and the liberal ideals of the west have found themselves in a deep crisis. Stern emphasized the importance of thinking of the west as a whole, to build-in the transatlantic perspective in order to revive enlightenment ideals. True courage is characterized by the ability to act even in the face of short-term political losses. The European spirit should be reanimated, and the current crisis should be used in order to further develop the European social-economic mode, Stern said. It is precisely this courage that we need even more urgently today, as Europe and the USA find each other again. In light of Joe Biden’s election win and following four years of “America First” policies, European politics could be more inspired.

The EU must engage more powerfully and purposefully against rightwing populism and rightwing extremism in Europe. Action must be taken against governments, politicians, and political parties that seek to bury democracy in their countries, and to encroach upon fundamental and civil rights among members of their national populations. It is about nothing less than defending democracy in our own societies.

The foreign policy ambitions of the EU typically fail due to deficits in solidarity and weaknesses in collective action. This is where we should learn a lesson after four years of Trump: a change in outlook is needed in order for Europe to assume more responsibility in international political agenda-setting. This would include forging new paths for Ukraine and Belarus. Another new east policy can be imagined, one where more value is placed on democratic creation and participation rather than stability in times of change. In any case, partnership with a Biden administration in credible service to democracy, international order and law is possible. The defeat of Trump is in and of itself something that strengthens the idea and fortification of democracy. Now we need to use this historic chance.

Willy Brandt’s politics has not lost relevance today. His courage to pursue new paths despite apparently insurmountable obstacles sets an example for us. In the face of a re-nationalization of politics in the wake of the coronavirus pandemic and its crises, western societies’ susceptibility to rightwing populism and the European Union’s propensity for crisis should open the door – in Brandtian terms – to Europe’s citizens and politicians with the call “defend democracy, but dare even more democracy!”

Translated from the German by Lauren Schwartz