Demonizing Mexican immigrants and building a wall were central to Trump's election. How has it impacted lives here at home and relations with Mexico? 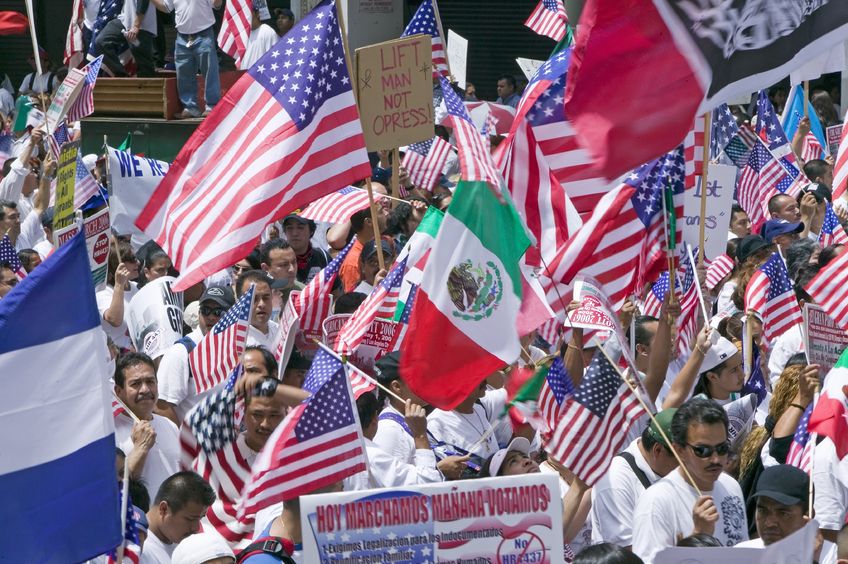 As the first 100 days of Donald Trump's presidency have drawn to a close, the Spotlight Series delivers critical assessments of the new administration from the point of view of the African American and Latino communities, female authors, young people, the LGBT community, experts, policy makers, and leaders of religious groups, among others. Our contributors offer in-depth analyses of social, economic, environmental, and foreign policies where possible, and evaluate developing data in areas such as race relations, governing institutions, and future elections.

From candidate to US president, Donald Trump has peddled inflammatory and dangerous rhetoric about migrants from Mexico. Trump’s speech has had real impacts, from pigeon-holing an entire nationality as ‘criminal’ to tearing families apart, and damaging the relationship between the two countries.  Trump’s rhetoric has had a real, tangible impact on the lives of Mexicans living the US. The strained relationship with our southern neighbor could cost the US more than an ally.  Notwithstanding the indisputable damage that’s already been done, Trump’s rhetoric and actions have also precipitated a domestic backlash. Activists have galvanized against this hateful juggernaut and their momentum is increasing. Outraged individuals from either side of the border are challenging this assault, proving that no matter what, ¡Sí se puede![1] (Yes, it can be done!)

This statement is emblematic of the comments made by President Donald Trump during his candidacy. Despite being disproven, as president, he has continued scapegoating Mexicans as the source of many US societal ills, due to what he deems their rampant “illegal” migration. His promise of a US-Mexico border wall not only bolstered his candidacy, but is still a popular preoccupation for his supporters. Chants of “Build the wall!” have followed him from rally to rally, from candidate to president.  His speech, which might, in fact, amount to hate speech, has incited contempt for migrants.

In the final presidential debate on October 19, 2016, Trump again drew on the narrative of Mexicans-as-criminal, and stated,

The "English-only" candidate Trump, appropriated the Spanish language to paint a simplistic picture using the tired trope of ‘us’ (legal Americans) versus ‘them’ (illegal criminals). Unfortunately, this was not the last of his attacks against the Mexican people and their country.

His first 100 days in office have not only proved harmful for Mexicans in the US, but also for our vital relationship with Mexico. To add insult to injury, Trump had been promising to build a wall and make Mexico foot the bill. In an early-morning tweet, candidate Trump asserted,

Mexico will pay for the wall!

Once in office, Trump continued to make that same assertion, pushing Mexican President Enrique Peña Nieto to cancel his trip to the White House in January. Following this cancellation, former Mexican president Vicente Fox did not mince words as he tweeted at Trump,

Donald, don't be self-indulgent. Mexico has spoken, we will never ever pay for the #FuckingWall.

Of late, he has walked back the original border wall plans, claiming the US will pay now, but Mexico will somehow pay later. Regardless, many bridges have already been burned due not only to the slipshod planning of the wall, but also the US’s offensive treatment of Mexicans and Mexico. Despite the misconception that Mexico leeches off the US, in reality, their relationship is mutually beneficial.

Mexico ranks second among U.S. export markets and is the third-leading supplier of U.S. imports. In 2015, total trade amounted to $531.1 billion. In addition, in 2015, the largest share of business travelers and tourists to the United States were Mexicans — around 27 percent of the total — at 20.4 million people…Mexico accounts for more visits than the United Kingdom, Japan, Germany, Brazil, China, and France combined, making up a large share of a tourist industry that accounts for 1.1 million jobs and $28.4 billion in wages in the United States[3].

Another mischaracterization is that Mexicans living in the U.S. without papers are a “drain” on society. Mexican workers, who make up a large portion of undocumented workers in the US, largely pay into our tax system[4]. “[L]ike all others living and working in the United States, undocumented immigrants are taxpayers too and collectively contribute an estimated $11.74 billion to state and local coffers each year… [5]”. Despite backing down significantly, Trump refuses to let go of his wall bombast, recently tweeting:

Don't let the fake media tell you that I have changed my position on the WALL. It will get built and help stop drugs, human trafficking etc.

Regrettably, some of his anti-Mexican sentiment has actually materialized into actions on the ground. U.S. Immigration and Customs Enforcement Agency (ICE) has heavily infiltrated “… communities where undocumented people live. Shortly after taking office in January, Trump signed executive orders that greatly expanded [their] power to target and detain undocumented immigrants.”[6] With ICE’s expanded powers, agents pluck individuals from formerly “safe” places increasing a climate of fear and causing hardship for many who just want to go to work, to their kids’ school, the hospital, or even church. This type of surveillance, with an underlying threat of removal, provokes a sense of anxiety and panic in migrant communities, and in their friends and families. This pervasive fear can prevent individuals from seeking medical treatment, or even calling the police - a lethal precedent.

Despite promising to target “bad” elements, this administration, in cooperation with ICE, has been busy. Following former President Barack Obama, whose deportation record seemed much higher than his predecessors— leading some circles to dub him ‘Deporter-in-Chief’[7], Trump is on track to surpass his record. Unlike under President Obama, the targeting of undocumented ‘non-criminal’ immigrants has seen a sharp uptick:

…21,362 immigrants have been brought into custody from when Trump took office in January to mid-March. The Trump administration has said that most of those rounded up were criminals, while 5441 were not. The total number of immigrants arrested for deportation by this time in 2016 was approximately 2500[8].

Even “protected” undocumented immigrants have come under attack. Individuals enjoying protections under DACA (Deferred Action for Childhood Arrivals)[9] have found they are no longer immune from detention, or even deportation.

A 23-year-old immigrant who says he was cleared to work and live in the U.S. under the Deferred Action for Childhood Arrivals (DACA) program has been deported, according to his lawyers. It’s believed to be the first such case under President Donald Trump to deal with the Obama-era protections that cover more than 750,000 undocumented immigrants in the U.S[10].

Some reports say that other DACA designees, or ‘Dreamers’ as they are called, have been picked up and some are currently in detention. This flouts Obama-era protections and contradicts the notion that Trump is only going after criminals. Recently, an Associated Press White House Correspondent, Julie Pace, interviewed Trump. In an appeal to ease the minds of anxious ‘Dreamers’, she pressed the president to comment on the situation:

AP: A lot of the dreamers have been hoping to hear something from you. I don’t want to give them the wrong message with this.

How can anyone “rest easy?” With ICE separating parents from children, how can families “rest easy?” With a President who has pathologized and threatened the Mexican people as a whole, why would they “rest easy?” Mexican immigrants with papers, Mexican-Americans and Americans of Mexican heritage alike are also being negatively impacted. By identifying or even just empathizing in some way with an ethnicity or nationality, disparaging remarks like Trump’s are injurious.  Further, even if an individual is not at personal risk of deportation, having friends, family, coworkers, and neighbors at risk is personal and produces anxiety.

Fear and anxiety have not stopped people and even cities from mobilizing. By March “[n]early 500 jurisdictions are now sanctuary cities… [and] there’s been a massive surge in the number of places trying to thwart federal immigration agents since President Trump’s election[12]”. The purpose of a sanctuary city[13] is to designate itself as a safe space for undocumented migrants. Whether these cities’ designations will be respected by this administration remains to be seen, but the sheer number of these areas pledging to protect these targeted populations shows a national opposition and defiance to  new immigration “policies”.

In a groundswell of public demonstration against Trump, people in Mexico have also joined in. On February 15, 2017, Mexico City saw uproar grow into two protests, “Two separate demonstrations, which together drew an estimated 20,000 people, merged on Mexico City's main avenue, Paseo de la Reforma, in a march mostly focused on the new US President[14]”. Since his inauguration, determined individuals have continued to show up and be heard.

A multitude of these determined folks, mostly Latinx[15], were out in Washington D.C. this May Day and I joined them. This outpouring of public support focused on migrant workers’ rights, along with solidarity for migrants, immigrants and refugees who have been impacted by Trump.

I had to chuckle at this, as it jumped out at me in bold white letters on a black shirt. The resistance is here and it even has a sense of humor. As I marched with families, organizers, union members and other concerned folks, chants of “¡Sí se puede!” guided us from Dupont Circle to the White House. If the last 100 days are any indication, people will continue to resist and yes, it can be done.

Andrea Elganzoury is a recent doctoral graduate of American University’s Department of Anthropology. She is a socio-cultural anthropologist who focuses on how gendered issues of forced migration in the Middle East, particularly Iraq and Jordan, directly connect to the US.

[1] “’Sí se puede’ is a term rooted in the struggle of working-class Latinos. It was the rallying cry of the United Farm Worker’s Union in the 1970s. Co-founders Dolores Huerta and Cesar Chavez adopted the motto during a 25-day fast in Phoenix, Arizona where they were trying to organize farm workers to demand fair wages and better working conditions. This mantra was meant to galvanize workers and inspire them”. Teresita Perez, “Sí Se Puede”

[4] Without the opportunity to receive tax returns.

[7] “While the Obama administration record is characterized by much higher [deportations] than preceding administrations, it also shows less focus on increasing absolute numbers of overall deportations and a higher priority on targeting the removals of recently arrived unauthorized immigrants and criminals. The administration also placed a much lower priority on removing those who had established roots in U.S. communities and had no criminal records”. Muzaffar Chishti, Sarah Pierce, and Jessica Bolter, The Obama Record on Deportations: Deporter in Chief or Not? Migration Policy Institute: http://www.migrationpolicy.org/article/obama-record-deportations-deporter-chief-or-not.

[8] Sonam Sheth, Half the undocumented immigrants rounded up in February raids had no criminal records or minor offenses. Business Insider: May 1, 2017. http://www.businessinsider.com/illegal-immigrantion-criminal-records-trump-ice-2017-5.

[10] Joshua Barajas, The government says he lost his DACA status, but this immigrant says he was deported despite protections. PBS News Hour: April 18, 2017. www.pbs.org/newshour/rundown/first-protected-dreamer-deported-president-trump/.

[13] “The term ‘sanctuary city’ is a broad term applied to jurisdictions that have policies in place designed to limit cooperation with or involvement in federal immigration enforcement actions”. Tal Kopan, What are sanctuary cities, and can they be defunded? CNN:January 25, 2017. http://www.cnn.com/2017/01/25/politics/sanctuary-cities-explained/.

[15] a gender-neutral word used instead of Latina/Latino