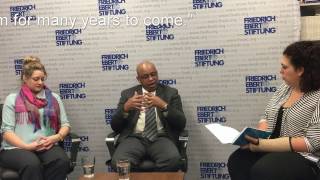 In response to Donald Trump’s upset victory and impending populist government takeovers in many European countries, we are running a series of articles whose purpose is to shed light on the many aspects of Trump’s populist election and governing strategy, the new administration's governing ideology, and movements that aim to counter the politics and policies of the new administration. Through our contributors’ pieces, we aim to provide up-to-date, thorough, and clear analyses of U.S. social-political developments that are relevant to our readership. We hope that our reporting translates into better and more actionable information for our audience in Europe and around the world.

The audio version of Dr. Elganzoury's interview can be found here.
You can read the entire transcript of the interview by clicking here.

Created in 1917, Lutheran Social Services of the National Capitol Area (LSS/NCA) has been welcoming and serving boldly serving refugees since World War II. One of their core missions is to assist those who have had to flee their homes as a result of persecution in their home country. Their main goal for refugees is to empower them to "…gain self-sufficiency through resettlement and employment services." One way they make this possible is by ‘engaging’ local communities to furnish much needed support to refugees and their families as they attempt to rebuild their lives and build new homes upon resettlement. Throughout DC, Maryland and Virginia, LSS/NCA and their partners assist around one thousand refugees each year. Yet, under the new administration, refugee resettlement and relief through LSS/NCA and organizations like them has suffered a dangerous blow.  The new president's two executive orders—targeting travel from "Muslim-majority countries" and halting the US resettlement program—have already had devastating consequences on refugees and their families. Recently, I sat down with Dr. Mamadou Sy, LSS/NCA’s Executive Director of Refugee & Immigration Services and Ms. Autumn Orme, Communications & Marketing Director. In an interview made possible by the Friedrich Ebert Foundation North America, we focused on how LSS/NCA is fairing in the era of Trump, what impact the orders are having on the refugees’ lives and insight into future implications.

Under the ‘Guise’ of a National Security Threat

According to the State Department’s Bureau of Population, Refugees, and Migration, “A refugee is someone who has fled from his or her home country and cannot return because he or she has a well-founded fear of persecution based on religion, race, nationality, political opinion or membership in a particular social group.” It is up to the United Nations High Commissioner for Refugees (UNHCR) to render this designation in the country they have fled to, and to figure out the best “durable solution” for each case. “…less than 1 percent of all refugees are eventually resettled in third countries, the United States welcomes almost two-thirds of these refugees, more than all other resettlement countries combined”.  In response to the currently-prevailing rhetoric about immigrants as  “national security threat,” Dr. Sy reminds us that:

…refugees are the most vetted individuals entering the United States. It takes an average of up to 24-36 months for an individual to go through all the processes…we also need to remind folks there is no record of refugees committing a terrorist act on U.S. soil. And   this, despite the U.S. government resettling over 3.2 million individuals since the mid70's.

Of course, Trump’s first executive order came as little surprise since as a candidate he ran widely on pathologizing migrants and refugees, and using “radical Islamic terrorism” as a rallying cry to stoke anti-Islamic sentiment. On January 27, 2017, the Order ‘Protecting the Nation from Foreign Terrorist Entry into the United States’ targeted, among others, the highly vetted refugee population. Sec. 5 of this executive order called for a Realignment of the U.S. Refugee Admissions Program for Fiscal Year 2017 and demanded that “(a) The Secretary of State shall suspend the U.S. Refugee Admissions Program (USRAP) for 120 days.” Not only did this decree conflate “refugee” and “terrorist,” it swiftly injured a resettlement program that has been critical to refugees since the post WWII-era. This order was eventually stayed and subsequently replaced, thanks to the efforts of the American Civil Liberties Union (ACLU), the advocacy of local resettlement agencies like LSS/NCA, and a dissentient judiciary, as well as a largely irate American population. Unfortunately, the revised executive order is just as damaging. As the ACLU’s director, David Cole, points out, this iteration is “still religious discrimination in the pretextual guise of national security. And it’s still unconstitutional.” On March 6, 2017, Trump’s new executive order, under the same name, again stipulated that “(a) The Secretary of State shall suspend travel of refugees into the United States under the USRAP, and the Secretary of Homeland Security shall suspend decisions on applications for refugee status, for 120 days after the effective date of this order, subject to waivers pursuant to subsection 6(a).”

Despite the fact that Trump’s first order was stayed and replaced, and his second order is currently on hold, the impact of his immigration directives are far-reaching. It is projected that the number of refugees who will enter the country this year will be cut down from 110,000 to 50,000. Further, the disruption in resettlement has created a back log of cases that will take years to make up, and translate into compounded years of refugees languishing in “temporary” conditions. Dr. Sy is alarmed by the decrease in

the number of individuals that [LSS/NCA] can serve, at a time when the individuals that need protection around the world is increasing. 2011, before the conflict in Syria and now, it's almost 4-5 million refugees that have been added to the refugee caseload. So at a time where the need for protection is growing, to see the leader, the world leader in terms of resettlement, pulling back, is very scary - because this could have a ripple effect on other countries and see the overall protection of refugees decrease.

In the past, the US’s resettlement program set an example for other nations to follow. Dr. Sy cautions that “for the United States to shift from that policy would basically tell the other countries that it is okay to reject refugees. And if that happens, then we are going to be facing a lot greater threats in the world than helping those individuals that are in need.” If all doors are closed to this stateless population, the consequences would be drastic and potentially irreversible. Elizabeth Ferris posits, “If countries neighboring Syria, for instance, were to close their borders or to return Syrian refugees to a bloodbath, the results would be unconscionable from a humanitarian perspective, disastrous from a regional stability one, and deeply detrimental to U.S. and international interests.” Moreover, Dr. Sy points out, the ramifications are both very human and personal “…you have all the psychological impacts on the families, not only the families abroad that will get phone calls from their family members that they will not be seeing each other, but also families that we have already resettled, that will reach out to us and ask us, what are we going to do now?” This pervasive sense of fear and helplessness seemed to echo throughout these past several weeks. Nevertheless, the answer to this feeling of despair has been resounding across the nation and the globe in the form of resistance and action. In the face of what Dr. Sy refers to as the rampant “misinformation that fuels fear,” LSS/NCA offers up clear, actionable steps, from contacting the White House, to signing letters of support that allow concerned people to "act in solidarity with refugees.”

In an era that could easily be characterized as bleak, Dr. Sy points out that LSS/NCA has seen an outpouring of compassion that “…has helped push back on the Executive Order. So, if everything that's happened since then has been because and thanks to that surge of compassion, that really helped us.” Ms. Orme adds that LSS/NCA has

500 volunteers in our queue as of yesterday…And we have about 60 congregations that haven't even started the process of becoming a refugee resettlement partner, but are ready and willing…so it's been amazing, the surge of compassion that we've seen. And, if that doesn't give you some hope, I don't know what will...

As Dr. Sy and Ms. Orme emphasize, both sides of the aisle have supported refugee resettlement over the years. Despite the current political climate, Ms. Orme asserts, "we're going to work with whatever administration to really push for refugee resettlement and really hope that continued bipartisan support continues.” The work of LSS/NCA and organizations like them becomes even more critical in times like these.

Andrea Elganzoury is a recent doctoral graduate of American University’s Department of Anthropology. She is a socio-cultural anthropologist who focuses on how gendered issues of forced migration in the Middle East, particularly Iraq and Jordan, directly connect to the US.