We remember each day – and especially each January 27th – in order to never let what happened in Auschwitz happen again. 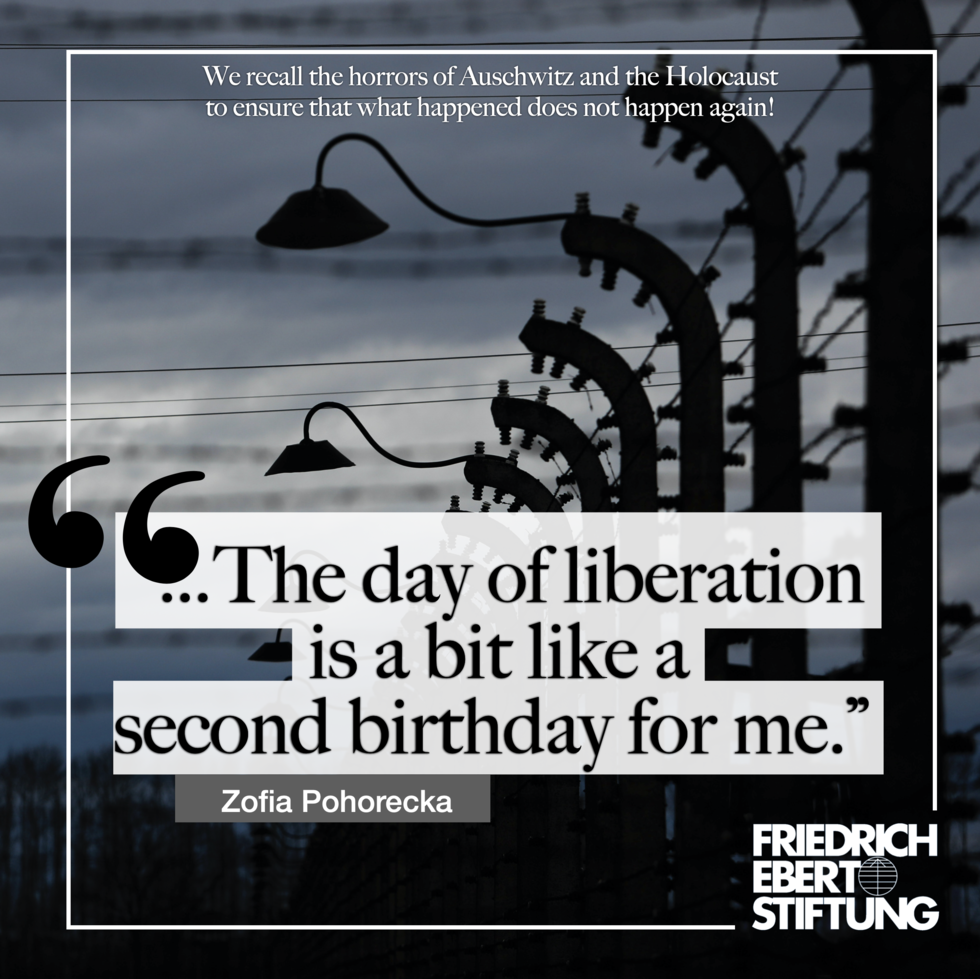 I often think of Zofia Pohorecka of Lviv, a Polish woman who was like a grandmother to me. We first met in 1990 when I spent a year and a half in Oświęcim at the International Youth Meeting Centre in Oświęcim/Auschwitz as a young volunteer with the Action Reconciliation Service for Peace. While I was there I would meet Zofia at least once a week, sometimes more often. Her story of survival and courage is especially resonant today, on this 76th anniversary of the Liberation of the Auschwitz concentration camp. Her memory is an inspiration to me every day.

During the Second World War and the Nazi occupation of Poland, Zofia worked as a courier for the Polish national resistance. She was captured in Lviv in 1942 during one of her deliveries and persecuted as a Pole, and as part of the resistance. She was imprisoned by the Gestapo in the notorious Pawiak prison in Warsaw, before being transferred to the women’s section of the Auschwitz-Birkenau concentration and extermination camp. Auschwitz-Birkenau was and remains a very complicated site. It was a center for imprisonment, torture, slavery, and death for political prisoners and persecuted groups – including Sinti, Roma, and Jews. From 1941, it was an epicenter of the mass murder of the Jews of Europe during the Holocaust.

In early January 1945, the Nazis evacuated the camps and forced the surviving prisoners into forced death marches westward. Miraculously, Zofia escaped from one of these marches and survived. Remarkably, she settled in the town of Oświęcim despite the trauma of years of captivity in the nearby camp.

Zofia narrowly escaped death at the hands of the National Socialists on several occasions, but the trauma she endured dissuaded her from speaking to Germans in her peer group. Soft-spoken but full of conviction, she felt that despite the challenges she had in discussing and revisiting her memories, it was important to speak with young people – and young Germans – about what had happened in Poland under Nazi administration and during the Holocaust. Many former inmates of the camp were committed to preserving the site as evidence of German crimes, and to remind the world about the merciless cruelty and loss of humanity that people can be capable of. In speaking with her and working with her as a young adult, I learned about the importance of conviction in politics, of values that constitute a meaningful life, and the importance of actively opposing right-wing nationalism and extremism.

I can still imagine Zofia in front of me, and I wish I could still speak with her. Her wisdom and wit made a profound impression on me. In 1995, as we walked through the town of Oświęcim and the former camp on the 50th anniversary of the Liberation of Auschwitz, she said to me that “the day of liberation is a bit like a second birthday for me.”

We recall the horrors of Auschwitz and the Holocaust to ensure that what happened does not happen again; to memorialize those who perished; to honor and attend to those who survived and to tend to their traumas. The remaining time we have first-hand with survivors dwindles by the day. It is left to us to learn their lessons and their stories, and to remember each day – and especially each January 27th – in order to never let what happened in Auschwitz happen again.