As we all settle into the new normal, women’s lived experience in Canada tells us that this pandemic is far from gender neutral – and our response can’t be either. 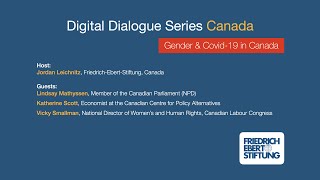 Five months into the pandemic, many families have settled into a new normal, with homeschooling squeezed in between endless Zoom meetings or shifts as an essential worker. But in Canada, lurking behind this new routine are radical changes to women’s lives that are having devastating consequences on the struggle for gender equality.

In our recent talk on the impacts of Covid-19 on women in Canada, economist Katherine Scott shared sobering data about women in the workforce. All told, by June almost a quarter of the female workforce in Canada have lost their jobs or the majority of their hours, with lone parents and the lowest-wage workers taking the brunt of the losses. The nascent recovery following Canada’s partial reopening in June has only deepened the employment gender gap, with women lagging men in job creation by a two-to-one margin.

A huge driver of this inequality is the absence of childcare options. In Canada, which lacks a national, public child care program, the majority of child care centres are closed and schools are out for summer with little organized camp programing available. Over a third of child care centres have announced that they may not reopen, ever. As families are forced to figure out who stays home with the kids, it’s overwhelmingly women who are stepping out of the workforce or reducing their hours to take that work on.

Provinces across Canada have been relatively quick to find ways to reopen non-essential businesses like hair salons and restaurants, but slow to make child care widely available. In the largest province of Ontario, plans to reopen schools only a couple days a week in the fall have caused outcry among parents who are expected to be working five days a week. The wealthy are finding their own ways around this by hiring caregivers and tutors, but for many families the only option is to have the lowest-earning parent, most often a woman, stay home.

Where women still have their jobs, they are often working on the front lines and at the greatest risk of exposure to Covid-19. During our discussion, New Democratic Party Critic for Women and Gender Equality Lindsay Mathyssen underlined that women are concentrated in caring sectors, essential retail and healthcare where working from home isn’t an option. These are often low-wage, precarious jobs where women aren’t secure enough to refuse work, even in unsafe conditions. In Ontario, the risk that women in these sectors face is compounded by decisions made by the current right-wing government, which – stunningly – abolished mandatory paid sick days in 2018.


Double Burden : Domestic Labor and Dangers in a Global Pandemic

Added to the crunch of work demands and lack of child care is the invisible mental load of running a household during a global pandemic. As Vicky Smallman, Director of Women’s and Human Rights at the Canadian Labour Congress put it, women are expected to just always “be there” to do unpaid caregiving – to organize grocery delivery, to keep the house sanitized and well-stocked, to tend to the whole family’s emotional well-being, and to keep the kids on track with schoolwork, activities and Zoom friend dates. Women are carrying a crushing practical and emotional load 24/7, all while trying to be good employees and fully-present parents, with no break in sight. It’s no wonder that seven in ten women in Canada are reporting high rates of stress anxiety, depression, fatigue and isolation during the crisis.

Importantly, for too many women in Canada, home is not a safe place to be. Domestic violence reports in Canada have risen 20 – 30% since the start of the crisis, just as access to shelters and other support services is more difficult than ever. In some areas in Canada, calls for help have gone up as much as 400 percent – or dropped off entirely, with advocates warning that the pandemic has created a pressure cooker of isolation, stress and surveillance for women experiencing violence.

The long-term consequences of this pandemic could be devastating for women in Canada. Decades of progress on gender equity in the workforce risks being rolled back as families struggle to balance child care with work demands. Women who step out of the workforce to caregive during the crisis may find it hard return when it’s over, and no government program can replace lost seniority, reduced earnings or derailed career tracks. There is a real risk that women’s long-term economic security, including pensions and retirement, will be harmed as a consequence of this crisis.

To date, the Canadian government’s response to the economic and social fallout of the pandemic has lacked any sustained gender lens. Mounting spending has already triggered calls from the usual quarters to cut back on expensive aid programs, despite the fact that Canada’s employment figures are far from out of the woods. Without serious and rapid public policy intervention, women will be left behind when the tide of assistance programs rolls back.

Experts are clear: doing better means designing a recovery that makes gender equality a top priority in Canada, first and foremost by making bold, long-term investments in the care economy and the services women need.

When it comes to getting people back to work, stimulus funds can’t just flow to traditional “shovel-ready projects” – large infrastructure construction – because this will overwhelmingly employ men. Investing in public, not-for-profit child care will create good jobs in a female-dominated sector, help women get back to work, and tackle a longstanding affordability issue in Canada, where child care can cost families up to $2,000 a month. Reinvigorating shelter, rape crisis and domestic violence services with much-needed funds will save lives, reduce the burden on mental health care and make our communities safer.


Investing in the Care Economy

Care economy investments could also address one of the most unnecessarily tragic outcomes of the Covid-19 crisis in Canada: over 5,000 deaths among seniors in long-term care homes. Alone among OECD peers, 80% of Canada’s Covid-related deaths have taken place in these facilities – twice the average rate of other developed countries. This is directly attributable to poor regulation, chronic under-funding and under-staffing, and privatization of these services. A gender-just recovery plan could make strong investments in publicly-funded long-term care to address these deplorable conditions. Hiring more staff to care for residents will employ women and help address the burden of unpaid elder caregiving that many families face.

Finally, as progressives globally consider how to revamp the idea of a Green New Deal to fit in a post-Covid future, our speakers reminded us that this work has to be grounded in a feminist analysis that has so far been almost totally lacking. Care jobs that overwhelmingly employ women are as essential to a sustainable, low-carbon future as any infrastructure or energy project.

As we all settle into the new normal, women’s lived experience in Canada tells us that this pandemic is far from gender neutral – and our response can’t be either.