The proceedings of the 7th Annual Toronto Conference on Germany 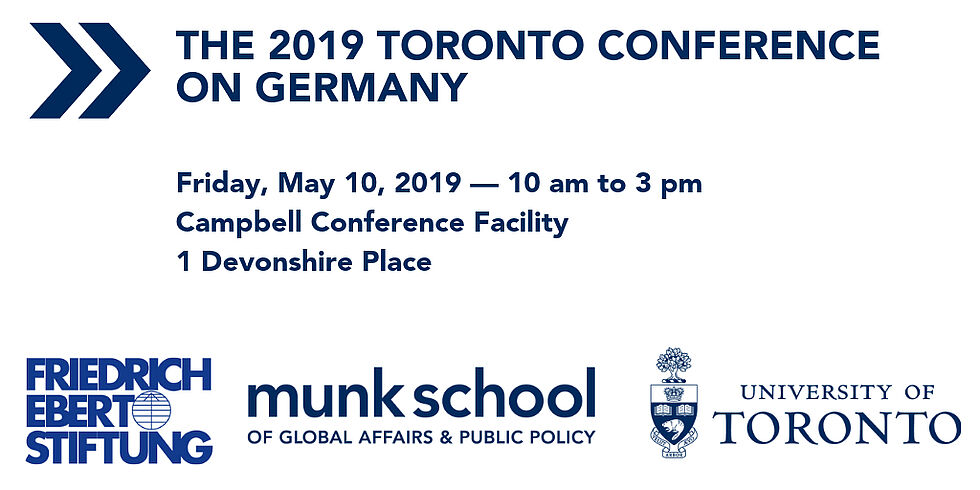 What do the European Elections Hold in Store for a Continent in Flux? : The seventh annual Conference on Germany at the Munk School in Toronto, Canada

On May 10, 2019, the flagship event of the FES in Canada – the annual Conference on Germany at the Munk School for Global Affairs and Public Policy – took place for the seventh consecutive year. As in each of the past six years, we invited politicians, journalists, and experts from academia on international relations between Canada, Germany and Europe to Toronto for a day of discussions and debate at Canada's most prestigious academic institution for international relations and foreign affairs. This year, the conference focused on the European elections at the end of May, as well as the elections to the Canadian House of Commons this coming October. Other conference partners included the German Academic Exchange Service (DAAD), and the Consulate General of Germany in Toronto.

Wolfgang Schmidt, State Secretary at the German Ministry of Finance, delivered the introductory keynote. Before a packed room of about 100 participants, the State Secretary analyzed what tendencies are emerging in the European elections. He provided a rough overview of the political forces in Germany and in Europe and discussed the expected outcome and majority in the European Parliament. The State Secretary suggested that it would not come to a new edition of the current "tacit Grand Coalition" in the European Parliament, but that changing majorities will most likely have to be sought in a much more dynamic European legislature. In such a scenario, the European Socialists and Democrats will be able, despite foreseeable losses in the elections, to play a key role in finding innovative majorities in the new European Parliament. Both in the keynote and in the subsequent Q & A with the audience, the expected strength of the right-wing parties was discussed.

How to Deal with Right-Wing Populists

The subsequent first panel discussion with the Canadian Member of Parliament Nathan Cullen (New Democratic Party of Canada); the chairman of the Angus-Reid Institute, Shachi Kurl; and the representative of the Friedrich-Ebert Foundation in North America, Knut Dethlefsen; examined specifically these right-wing extremist and right-wing populist forces. They were discussed both in the context of the European elections, and in the October elections to the Canadian House of Commons. It was agreed that while right-wing populists would have an upswing in many places, their superficial political offers and their internal dissent would probably bind them to a maximum of about 20 percent in the electorate (a so called “ceiling”). Thus, they will probably continue to be shut out of government responsibilities or any significant formal influence on politics. However, while this should apply both to the future European Parliament and the Canadian House of Commons, it should not encourage an apathetic reaction on the part of moderate forces. "Poking the bear, running away from the bear, ignoring the bear – they're all bad options," said MP Nathan Cullen. The right-wing populists do need to be confronted on substantive issues, in order to be beaten.

A ‘Coalition of the Modest’ to the Rescue?

The second panel discussion focused on the impact of the elections on international relations between countries on both sides of the Atlantic, and specifically on the German-Canadian partnership. This partnership was presented as the "Coalition of the Modest", an assessment that was well shared by our panelists. Contributing to the discussion was the writer and former chairman of PEN International, John Ralston Saul; as well as the founding president of the Munk School and well-known commentator, Janice Gross Stein. The panel was moderated by Roland Nelles, the chief correspondent of Der SPIEGEL in Washington, D.C.

Different assessments were ultimately made about the role of migration and immigration. While Janice Stein highlighted the issue of immigration and migration as the driving forces of right-wing populism, and thus as a potential problem for any liberal-democratic coalition of moderates, John Ralston Saul emphasized that the Canadian immigration and integration system continues to be a positive example, to be shared on the other side of the Atlantic. The participants agreed that the Canadian immigration system continues to enjoy high popularity among the Canadian voters, while the arrival of migrants across the US-Canadian border is causing electoral discomfort. The Canadian integration model based on multiculturalism is also being challenged, especially in the province of Quebec.

Finally, our host Randall Hansen, the interim director of the Munk School, summed up the two panel discussions and the keynote in: Germany and Canada will still be codependent after the elections and will thus have to defend their coalition of modesty against mounting resistance in world politics. Hansen sees the possible successor of Angela Merkel at the helm of Germany’s Christian Democratic party, as opposed to the result of the European elections, as a more likely obstacle to such an alliance. Similarly, the outcome of the Canadian elections is unlikely to drive a wedge into the German-Canadian coalition, as most panelists still expect the current Liberal government to be re-elected, despite troubling results of recent polling.

Overall, this year's conference was able to attract a very high caliber of participants and enjoyed strong attendance. Beyond the academically engaged professional audience at the University of Toronto and the diplomatic community in Toronto, many civil society organizations and think tanks were engaged in the process. In addition, the conference could be followed through both a livestream and even afterwards, in a video recording. Click here to follow the link to the FES’ YouTube channel to watch the proceedings.