Germany and the United States differ in their approaches to Russia’s energy trade with Europe, giving rise to a potential stumbling block over Nord Stream 2, an undersea natural gas pipeline between Russia and Germany that is now nearly complete. 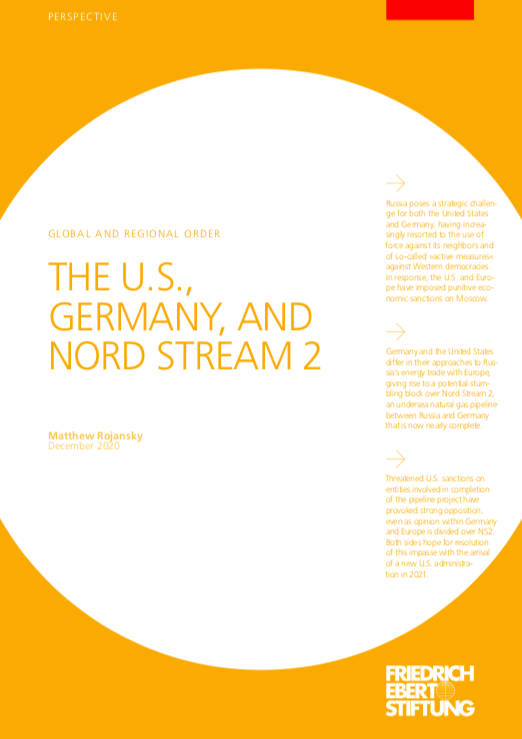 Germany has imported Soviet and Russian natural gas for over half a century, despite tensions during and since the Cold War. Advocates of the Nord Stream 2 pipeline argue that deeper energy interdependence is part of the recipe for effectively engaging Russia and preventing future conflict. They view the project as one part of a European energy strategy, including gas transit via Ukraine, increased imports of liquefied natural gas (LNG), and much more reliance on renewable energy sources. Some also object to U.S. pressure over NS2 as a violation of European sovereignty, and warn that in the long term, Washington’s policies could damage transatlantic unity and force Europe to develop its own tools of economic coercion.

Opponents consider NS2 a purely geopolitical Kremlin project, aimed at cutting Ukraine out of Europe’s energy map, and increasing Russian leverage over Germany and the rest of Europe. Leaders from both parties in Washington share this concern, and have threatened to impose sanctions on German and any other European firms that assist in completing the pipeline. U.S. officials have described NS2 as "aiding and abetting Russia’s malign influence projects," while Ukrainians call it an "existential threat" to democracy. Authors of current and pending sanctions legislation acknowledge that sanctions are intended to force a zero-sum choice, between participating in the project or doing business with the United States.

Although there is strong bipartisan support for NS2 sanctions in Washington, there are also hopes that the arrival of the Biden-Harris Administration in 2021 will make a mutually beneficial solution possible. While President Biden is likely to reemphasize strong U.S. ties with traditional European allies, especially Germany, he has called NS2 a "fundamen- tally bad deal" and is not likely to abandon his opposition. Meanwhile, concerns linger in Germany about whether U.S. elections in 2024 and beyond could bring less conciliatory policies. Both sides agree that continued support for Ukraine and investments in energy diversification for Europe as a whole are desirable, but the impasse over completing the pipeline itself remains in the shadow of sanctions.