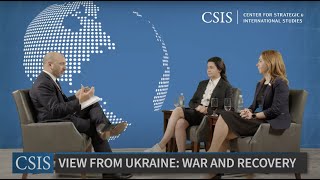 The event will be webcast live here and  here

Please join CSIS and the Friedrich Ebert Stiftung for a conversation with Member of the Ukrainian Parliament, Halyna Yanchenko, Deputy Chair of the Committee on Anti-Corruption Policy, and Sevhil Musaieva, Editor-in-Chief of Ukrainska Pravda, Ukraine’s largest online newspaper. This conversation will provide an opportunity to discuss the work of the Ukrainian legislature during wartime, as well as how Ukrainian civil society is responding to the war and how ordinary Ukrainians see the future of the conflict evolving. As the United States and European allies continue to send aid to Ukraine, MP Yanchenko and Ms. Musaieva will reflect on what more is needed from Western governments and how external actors can best support Ukraine’s reconstruction. This conversation will be opened and moderated by Max Bergmann, Director of the CSIS Europe, Russia, and Eurasia Program, and feature welcome remarks by Knut Dethlefsen, Representative of the Friedrich-Ebert-Stiftung in the United States and Canada.